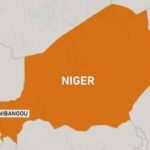 ADDIS ABABA – The Chairperson of the African Union Commission Moussa Faki Mahamat has condemned “in the strongest terms” the terrorist attack in Niger.

The gunmen ambushed a delegation led by the mayor of Banibangou on Tuesday about 50km from the town, in the western region of Tillaberi near the border with Mali.

Officials of the West African nation on Thursday said at least 69 civilians including the mayor have been killed, and declared a two-day long national mourning.

In a statement today, Chairperson of AUC has extended “his sincere condolences to the bereaved families and reaffirms the African Union’s solidarity with the government and people of Niger during this difficult time”.

Mahamat has also reaffirmed that “this shocking new attack against civilians is a stark reminder of the urgent need for renewed regional and international support and solidarity with the governments and people of the Sahel Region in their fight against terrorism”.

Armed groups have killed more than 530 people in attacks on civilians in the frontier regions of southwest Nigeria this year, over five times more than in all of 2020, according to reports.