The financial sector registered a massive change through the reform period that expanded their asset on average by 24.5 percent every year in the past four years.

Frezer Ayalew, Director of Banking Supervision Directorate at National Bank of Ethiopia, said that in the financial year closed in 2019 the total asset of banks was 1.3 trillion birr and now climbed by 92 percent to reach 2.5 trillion birr at the end of the 2021/22 financial year.

In four years time the number deposit accounts has increased by 108 percent to reach 83.3 million. 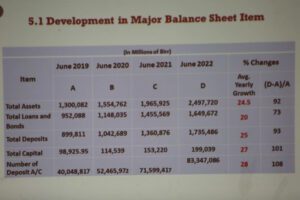 Frezer said that the banking sector has continued its safe and sound operation. “The banking sector capital adequacy ration stood at 16.04 percent above from the internationally required standard of eight percent. Similarly the non performing loan ration is 3.87 percent against five percent of the requirement, while liquidity ratio at the banking sector is 27.05 percent, which NBE expected it to be 15 percent,” he said.

“Our banks are operating in an internationally required model that makes them financially sound,” the Director added.

He reminded that the policy bank, Development Bank of Ethiopia, attains massive progress in the past few years to return back to prudent operational status.

The banking industry that registered significant change is the interest free banking (IFB) with two full-fledged banks already operational besides one that transformed to bank from micro finance institution and one more has secured license to open its door. Besides the two full-fledged banks 11 banks are providing IFB services through windows. As of March 2022 over 11 million accounts holders registered for the deposit mobilization of 117.2 billion birr in the IFB.

“35.5 billion birr have been availed through 4,842 IFB credit accounts on the financing side,” Frezer said. 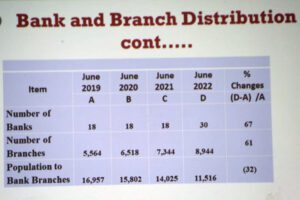 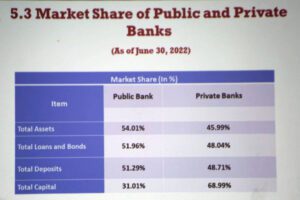