The cooperation between Ethiopia and India is a good example of South-South cooperation based on mutual respect and benefit, Foreign Affairs State Minister Tsion Teklu said.
Speaking at a discussion forum organized by Embassy of India and India Business Forum on Tuesday May 25, the state minister said the relationship between the two countries has deepened significantly and their cooperation is based on mutual respect and benefit.
This is a good example of South-South cooperation and Ethiopia draws meaningful lessons from India’s experiences and expertise in different areas, she added.
Noting that India is among the largest sources of FID in Ethiopia, Tsion said, adding that “what makes India unique is the fact that the contribution is not only through investment but also trade, education, consultancy and capacity building.” 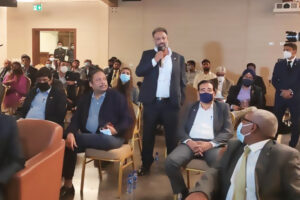 According to her, the Government of Ethiopia is working tirelessly to widen and deepen its reforms which promote democratization, rule of law, god governance as well as working on the serious measures aimed at reforming the economy and financial management so as to promote transparency and accountability across the entire administration.
This will make Ethiopia one of the best destinations of FDI in Africa, the state minister pointed out.
India’s Ambassador to Ethiopia, Shetkintong Robert said Indian companies are among the largest foreign investors in Ethiopia engaged in different sectors.
“During the last one year alone we have 35 new Indian investment projects here in Ethiopia, despite the COVID-19 pandemic,” Ambassador Robert stated.
There are about 607 Indian companies in Ethiopia with licensed investment of over 5 billion USD, out of which about 3 billion USD is estimated to be on the ground and created jobs for 75,000 people.
About 60 percent of Indian investments are in manufacturing, followed by 18 percent in agriculture. Others are in floriculture, engineering, plastics, cotton and textiles, water management, consultancy and ICT, education, pharmaceuticals and health care.

The post Cooperation between Ethiopia, India based on mutual respect, benefit appeared first on capital Newspaper .

ADDIS ABABA – Kenya is keen on exploiting its long-standing... END_OF_DOCUMENT_TOKEN_TO_BE_REPLACED