A new report that is on its finalization to be released states that counterfeit seed is threatening the seed sector. The gap in demand and supply is stated as one of the major reasons for the vulnerability to counterfeit seeds.
The draft country report that was prepared by The African Seed Access Index (TASAI) and tabled for stakeholders for final consultation indicated that the counterfeit seed, which is also known as fake seed, threatens the seed sector in two important ways.
“First it reduces farmers’ confidence in the certified seed when farmers unknowingly plant inferior quality grain falsely labeled as certified seed,” it says, adding, “it threatens the successes of efforts to increase the adoption of improved varieties because farmers won’t be sure which seed is genuine.”
Maize and wheat are the dominant crops in terms of seed production in Ethiopia, accounting for 95 percent of combined sales (by volume) of the four crops.
Mohammed Hassena, who is one of the lead researchers on the 2022 country report of TASAI, said that the case shall not be that much exaggerated since it is mainly seen on very few seeds mainly on maize seed.
The problem mainly occurs on maize, due to that grain to seed price ratio is from 1 to 3.5 for public varieties and at some private seed companies, it is one to 6.9, while the price ratio is not that high for others like wheat or teff.
“The illegal actors are mainly abusing the sector because there is a shortage of improved seed supply,” Mohammed said.
Commonly and frequently the case is seen in some known areas like Bure, east Wellega, Shashemene, or Alaba in the country.
“The limited capacity of regulatory bodies and knowledge gap of law enforcement instrument is the major challenge to tackle the problem,” Mohammed says, adding, “for the increment of access to the seed; expanding the number of seed producers, marketing and law enforcement must be tackled strongly.”
In its report, TASAI covered the seed sector of maize, wheat, teff, and sorghum.
The draft report shows that Ethiopia registered 54 active seed producers for the four crops in 2020: 27 private companies, four government parastatals, and 23 seed cooperatives. Most of these entities produced maize seed (34 producers) or wheat seed (27 producers).
The number of seed producers has increased for three crops except for sorghum between 2017 and 2020.
Improved seeds coverage for grain crops that includes pulses is about 20 percent on average of the demand. When it comes to maize quality seed, which is a hybrid seed, the coverage is about 55 percent of the demand.
TASAI’s survey identified that in 2020 seed companies sold 28,177 metric tons of maize seed, 41, 646 metric tons, 3, 069 metric tons, and 106 metric tons of wheat, teff and sorghum seeds respectively.
TASAI’s survey has slight changes like increased wheat and teff seed sales and reduction of maize compared with the data from the regulatory body due to different sampling and availability of relevant data.
The draft report added that for all crops, these were modest increases from seed sales recorded in 2016. For instance, seed sales for sorghum were 60 metric tons in 2016 that stood at 106 metric tons in 2020, and teff seed sales have reached 3,069 metric tons from 2,654 metric tons in 2016.
The draft report indicated that an increase in the number of varieties sold in a country often results in an increase in the choice of varieties available to farmers.
In 2020, 65 varieties of the four crops were sold to farmers: 28 wheat varieties, 24 maize varieties, 11 sorghum varieties and 10 teff varieties, “despite the high number of varieties released for the four crops, a small number of varieties dominate seed production on the country.”
In the case of maize, the top five varieties account for 87 percent of all maize seed production. For wheat and sorghum, the top five varieties account for 75 and 93 percent of seed production respectively, while the top four teff varieties account for 98 percent of all teff seed production.
“These findings imply that most of the varieties are not widely grown, despite the fact that Ethiopia has a wide range of agro-ecologies,” the report that is expected to be finalized very soon said.
From 2001 to 2020 a total of 258 varieties of the four crops were released wheat and maize took the lion share by 107 and 65 respectively.
Just in three years’ time up to 2020, 43 varieties were released that are also led by wheat seed.
TASAI is to promote the creation and maintenance of enabling environments for competitive seed systems serving smallholder farmers.  It is this enabling environment that TASAI seeks to measure, track, and compare across African countries. TASAI’s intended outcome is improved access to locally adapted, affordable, and the high-quality seed of improved varieties by smallholder farmers in Sub-Saharan Africa. 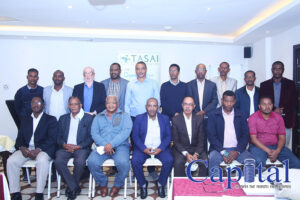 ADDIS ABABA – Kubik, a US based environmental technology company,... END_OF_DOCUMENT_TOKEN_TO_BE_REPLACED