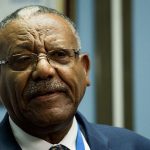 ADDIS ABABA – The Board of Management of Ethiopian Airlines Group will announce a new CEO for Ethiopian shortly, the airlines says today.

The announcement comes on the same day the board has accepted Tewolde Gebremariam’s request for early retirement from top position at the airlines for medical reasons.

“The Board will announce the new Group CEO and successor to Ato Tewolde GebreMariam shortly,” says the airlines in a statement.

According to the airlines, Girma Wake, former CEO of Ethiopian Airlines, has been appointed recently as a new Chairman of the Board by the Ethiopian Public Enterprises Holding & Administration Agency.

“Girma Wake is a highly experienced, successful and well-regarded business leader and a well-known figure in the aviation industry,” the statement reads.

Girma, predecessor of Tewolde, served as CEO of the Ethiopian Airlines for 7 years and laid the foundation for the fast and profitable growth of the airline.

“The combination of his experience, work-culture and drive makes him capable of chairing the board and take the airline to the next level. Mr. Girma’s decision-making skills are tested and well proved,” the airlines says.

Featured Image Caption: Girma Wake, former CEO of Ethiopian Airlines, has been appointed as a new Chairman of the Board. [Photo File]

No one can dispute that video games are hugely popular... END_OF_DOCUMENT_TOKEN_TO_BE_REPLACED

ADDIS ABABA – About 146 Ethiopian migrants, who were stranded... END_OF_DOCUMENT_TOKEN_TO_BE_REPLACED