Public entities and private enterprises team up to boost barley production and income by 20 percent before 2025.
The scheme under the motto ‘better income through improved barley production’ (BITIB) brought together the Maltsters and GIZ GmbH to develop a framework for the funding program which GIZ will implement on behalf of the Ministry of Economic Cooperation and Development of German.
At the project launching ceremony held at Inter Luxury Hotel, it was stated that key stakeholders of the barley value chain will come together to form a development partnership with the private sector.
Based on the new initiative local maltsters, Assela and Gondar malt factory along with Boortmalt Ethiopia, will partner with the Ethiopian Institute of Agricultural Research (EIAR) to provide new varieties of barley seeds that will be developed at the prominent research institute to local farmers.
The aim of the project is to sustainably improve the availability of quality seed of locally adopted barley varieties fulfilling industry standards, benefiting small farming households as the seed producer, in addition to sustaining the raw barley for malt and beer production.
Ethiopian Maltsters Association (EMA) shall intensify its technical cooperation and will provide investments in the barley breeding program of EIAR to ensure the timely release of new varieties as well as the production of sufficient and high-quality early generation seed by the institute. 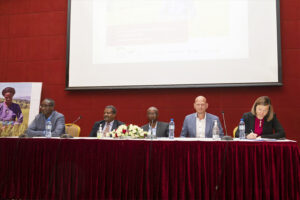 “A new barley variety that is quickly available to farmers in the form of certified seed will reduce the use of fertilizer and fungicides, increase productivity compared to currently used varieties and thus increase the income of small farming households,” it has been stated.
Diriba Geleti, Deputy Director EIAR, noted that the aim of the project is to enhance the public-private partnership (PPP) modality in the agriculture sector. “This project will also enhance capacity and productivity of small holder farmers,” said the deputy, adding, “interpreting researches that are conducted on malt barley into reality is essential.”
Despite barley production having some changes in the past years, benefiting about 180,000 household farmers, the output is very low compared with the sharply increasing demand in the market.
Andria Ruediger, Project Manager of GIZ, said that Ethiopian highlands are suitable for barley production, while the actual supply for the market is very low compared with the demand mainly at the maltsters.
She said that in the past two years, the malt barley demand has increased by 160,000 tonnes due to two international malt companies that include Soufflet joining the barley value chain. “Currently, the malt barley demand in Ethiopia is 260,000 tones and in 2021 only 100,000 tones were collected locally,” Andria stated whilst highlighting the gap.
“Very limited seed production and a long time to market, are further challenges for the sector,” she added.
Tadesse Kassahun, Head of Gondar Malt Factory, said that the four Ethiopian maltsters are producing over 1.8 million quintals of malt barley per annum.
“To produce the stated amount, companies need about 2.6 million quintals of beer barley as input, while the actual local harvest was one million quintals last year, which shows that an additional 1.6 million quintals are needed,” Tadesse commented at the event.