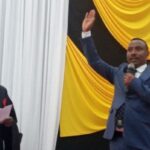 Residents of one special world and five zones voted in favor of breaking away from Southern Nations, Nationalities, and Peoples’ (SNNP) Regional state in a referendum vote held on Sep. 30 and form a new region.

Thirty days later the result was approved by the upper house of Ethiopian parliament paving a way for formation of South West Ethiopia Regional state.

On Tuesday, the region was inaugurated as the eleventh state of Ethiopia during its council first ever session held in Bonga Town in the presence of higher federal and regional government officials.

During their session, members of the regional council unanimously approved draft constitution and elected Negash Wagesho as chief administrator for the region.

The council has also adopted Amharic to serve as working language of the region.

In his inaugural speech, the chief administrator said the constitutional right that has been witnessed today by exercising the right to self-administration is the result of reforms undertaken in Ethiopia.

Negash said his administration will work hard to improve the livelihood of the people and make use of the resources the region’s resource potential for betterment of its residents.

ADDIS ABABA – The African Union on Friday said its... END_OF_DOCUMENT_TOKEN_TO_BE_REPLACED

There has been little to no action taken to address... END_OF_DOCUMENT_TOKEN_TO_BE_REPLACED

ADDIS ABABA – All high schools across Ethiopia will be... END_OF_DOCUMENT_TOKEN_TO_BE_REPLACED