As a payment instrument issuer, telebirr of Ethio Telecom has embarked on a process to connect with the national switch of EthSwitch SC (ETS).
EthSwitch concluded the 2020/21 financial year with massive success along with commercialization of POS terminals interoperability and huge profit despite not being a profit oriented facility.
The company which was established in 2011 as a share company fully owned by all banks has celebrated its tenth anniversary in the presence of senior government officials.
Early this year, Ethio Telecom broke through the country’s financial bubble by availing telebirr; and has been making huge strides in the financial space by introducing the capabilities of mobile money. Yilebes Addis, CEO of ETS, said that his company, which is the only national switch as per the directive of National Bank of Ethiopia (NBE), is under discussion with the telecom giant to interoperate its scheme with other financial firms such as banks and micro finance institutions.

Messay Wubshet, Chief Communication Office of Ethio Telecom, confirmed that the leadership of telebirr has started discussion with ETS to interoperate its service with other financial firms.

Yilebes said that there are technical and legal criteria that the payment instrument issuer should fulfill to which ETS has tabled the same to Ethio Telecom. “Generally, Tele is on the process of integrating with the system,” he explained.
The pilot would be prior before transferring to full scale operation. The interoperability will allow telebirr to ease the transactions from banks to its platform and vice versa.
Currently, Ethio Telecom is working with banks by itself to interconnect its telebirr transactions, while under ‘Licensing and Authorization of Payment System Operators Directive No. ONPS/02/2020’ directive NBE, ETS is the only body to provide the interoperability scheme between payment instrument issuers be it telebirr or other financial firms. 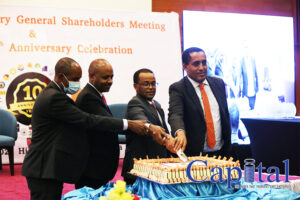 Article nine sub article one of the directive indicates that there shall be a single national switch operator.
The same article sub article 2 adds that EthSwitch SC shall be the national switch for card and instant retail payments and transfers.
Yilebes did not disclose a given period when telebirr will engage in full scale operation under the national switch platform.
Capital’s effort to get further comment from Brook Adhana, Head of telebirr at Ethio Telecom, was unfruitful.
In the 2020/21 financial year the banking industry as a whole processed a total of over 226.6 million ATM transactions, of which over 38.3 million were interbank transactions facilitated by EthSwitch (ETS) infrastructure.
According to the annual report compared with the preceding year that ended on June 30, 2020, the total number of interbank transaction processed by ETS increased by 41.5 percent.
Out of the total interbank transactions over 23.3 million transactions have been eligible for free cash withdrawal with 109 percent achievement compared to the plan.
POS transactions volume carried out by the banking industry stood at a total of over 2.9 million with the value of over 7.4 billion birr in the stated period, while 109, 506 transactions were interbank transactions processed by ETS. The full scale interoperability of POS terminals was embarked early last fiscal year.
Compared with the performance achieved on ATM, the interbank POS activity is weak and at an event Yinager Dessie, Governor of NBE, expressed need for change. He said that the financial institutions are responsible to educate the community to boost the non-cash transactions through POS.
In the past fiscal year ETS has also successfully accomplished the person to person (P2P) piloting that involved banks and last month NBE has given green light for commercialization and all financial firms are now using the same.
Under P2P piloting period with all banks close to 30 thousand transactions with the value of about 215 million birr have been conducted.
The P2P is the interoperability of digital wallet, mobile and internet banking systems run by banks, microfinance institutions and E-money issuers.
According to the annual report the national switch has completed integration with four government service providers and financial institutions to realize the P2G. It added that ETS has completed P2G integration with different financial institutions.
Prior to the 10th anniversary ceremony at the 8th general assembly held on the same day at Hilton Hotel on Thursday December 12 Tsehay Shiferaw, Chairperson of the Board of Directors of ETS, remarked the achievements of the company. He added the profit before tax has expanded by 211.6 percent to 87.3 million birr.
For the year the profit after tax stood at 61.4 million birr from 24.3 million birr of a year ago.
“The financial year was a challenging year both at the global and national levels, yet, EthSwitch concluded a very successful year,” Tsehay, who is the President of Awash Bank, said.
The profit secured for the year is pushed by the total revenue that accomplished 115 percent of the projection. In the year the total revenue of the company was 142.3 million birr.
The statement ETS issued indicated that in the year the company registered significant growth in all areas of its business including assets and capital.
As of June 30, 2021 ETS’s asset has reached over 601 million birr that increased by 120 percent from 273 million birr in June 2020.
Similarly in the reported period the paid capital has expanded by 97 percent to 460 million birr, while the subscribed capital is 600 million birr.
Yinager, who strongly appreciated the 10 years journey of ETS, insisted the shareholders to increase the capital of their company to keep its strength and investment.
The CEO said in the fiscal year achievements like payment card industry data security standard (PCI-DSS), piloting of P2P and integration of P2G has been registered.
Ethswitch is a company established to service all financial institutions and payment operators in Ethiopia to provide channel interoperability, institute domestic payment scheme and provide shared infrastructure/platforms. Currently, it is implementing a five year strategic plan.

The post Tele Birr to interoperate with EthSwitch appeared first on Capital Newspaper .

Are African teams ready for Qatar 2022 even as preparations near end?

The value of birr has shown a depreciation of over... END_OF_DOCUMENT_TOKEN_TO_BE_REPLACED

Ethiopia: Tigray - Aid Operations 'About to Grind to a Halt', Warns WFP
Ethiopia: News - UN "Alarmed" By Ethiopia Airstrike in Tigray Killing At Least 108, Injuring More Than 75 Civilians Since the Year Began
Ethiopia At Crossroads As Drone Attacks Worsen Tigray Crisis & Sudan re-closes border with Ethiopia after 10-day reopening
Ethiopia objects to alleged “misconduct” of WHO chief Tedros
Ethiopia lashes out at WHO chief for Tigray war remarks