TotalEnergies launches the third round of startup of the year challenge in 32 countries within the African continent.
The third round was launched with the aim to support young African entrepreneurs between the ages of 18 and 35. “All business creation project holders and young innovative startups with a positive impact on their communities and the planet can participate,” stated TotalEnergies.
According to the official statement of TotalEnergies, entrepreneurs can participant in three categories, that is: Best business creation project, Best startup under-3 years of age, and Best female entrepreneur.
“Beyond the entrepreneurial spirit, this year’s challenge reaffirms total energies commitment to support the socio economic development of the countries in which the company operates in Africa,” said Total.
The competition is said to strength the local fabric by supporting the most innovative entrepreneurs in the realization of their project. 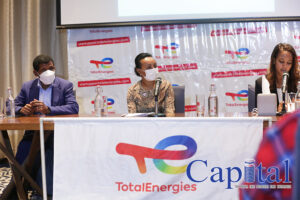 According to TotalEnergies, three winners will be selected from each participant country and following the nomination of the three winners per country, an international jury will meet to select the three grand winners for the continent.
“A local jury made up of experts, people from the world of startups, company managers from local sustainable development players and managers from TotalEnergies Marketing Ethiopia will select three winners from Ethiopia,” TotalEnergies Ethiopia disclosed.
According to TotalEnergies, winners will get rewards and benefits including: Financial support, media visibility and coaching.
The 32 participating countries are from North Africa: Algeria, Egypt, Morocco, Mauritania and Tunisia West Africa: Ivory Coast, Ghana, Guinea, Nigeria, Senegal and Togo, Cameroon, Gabon, Equatorial Guinea, Central Africa: Democratic Republic of the Congo and Republic of the Congo, East Africa: Ethiopia, Eritrea, Kenya, , Uganda and Tanzania and from South Africa: South Africa, Angola, Botswana, Eswatini, Malawi, Mozambique, Namibia, Zambia and Zimbabwe and the islands of Reunion, Island-Mayotte Island, Madagascar.
Accessible directly through an online platform, registration was opened on the 4th of November 2021 which stretches to December 23, 2021.
Additional to the previous start-up launches, the “best female entrepreneur” is a new feature for the 3rd edition which aims to firmly encourage female entrepreneurship on the continent.
The first edition of total energies startup challenge was held in 2016 where 102 winners were chosen from 34 countries while the second was held in 2019 participants were from 55 countries worldwide, 165 winners were selected.

The post TotalEnergies launches the 3rd edition of the startup challenge appeared first on capital Newspaper .

ADDIS ABABA – Member states of need to curb the... END_OF_DOCUMENT_TOKEN_TO_BE_REPLACED