The Association of Ethiopian Insurers (AEI) gives recognition of a lifetime achievement award to the prominent insurance gurus Zafu Eyesuswork and Tsegaye Kemsi for their contribution to the growth of the Ethiopian insurance industry.
The Association, consisting of 18 insurance companies and two reinsurers, held its closing ceremony of the 21st Annual General Meeting at the Inter luxury Hotel on December 16, 2021 with the recognition of Zafu Eyesuswork and Tsegaye, who have made significant contributions by dedicating their life to the growth of the insurance industry in Ethiopia.
The Insurance Industry award was presented by Yared Molla, President of AEI and Nyala Insurance, to Zafu Eyesuswork, who has contributed over 58 years to the insurance industry, and Tsegaye, who has served the industry for over 46 years.
The insurance association has announced that it will have a similar acknowledgement program every year for those who will be recognized for their role to the industry growth. 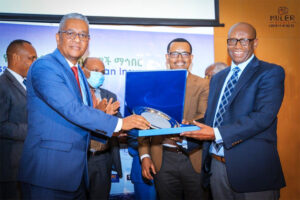